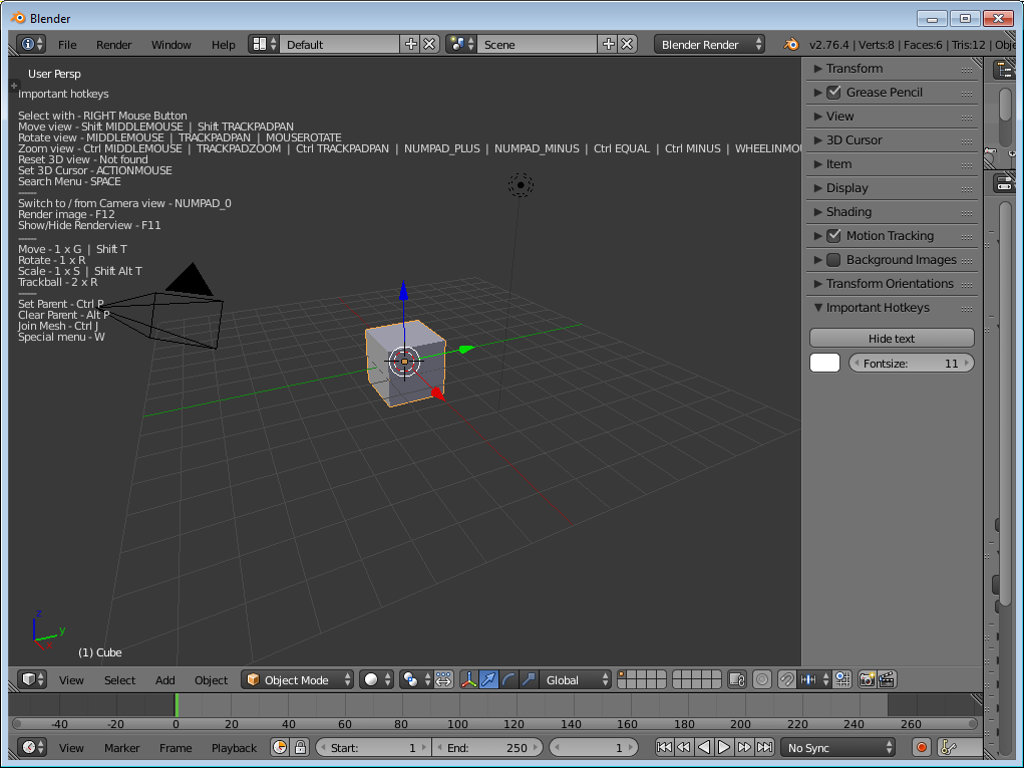 Download the script. ( Right click at it, and save target as … )
Unzip the script.
Open the Blender User Preferences and switch to the Addons Tab.
Click the Install from File button, and install the plugin.
Activate the new installed Plugin.
Save User Preferences.

The script installs into the Properties sidebar of the 3D View. To display the text simply click at the Show Text button in the Important Hotkeys panel . You can hide the text by clicking at the same button.

You can add a hotkey in the right click menu of the button when you need the text more often. Don’t forget to save the user preferences then.

There are also two settings available. Clicking at the white field will open a colour picker where you can adjust the text colour. And you can change the font size.

When the plugin displays a string “Not found” then the hotkey for this tool does not exist yet. Either you leave this as it is. Or you add a shortcut for this tool. This is best done by the right click menu of the corresponding menu item.

The hotkeys to switch between point, edge and face select mode is a special case. First, some old time users might have set up some hotkeys here by hand. There are still advices in the internet how to do this. Which most probably will not be found by the addon since this by hand created hotkey node looks different from the hotkey node created by Blender.

And second since you have to know where to assign those hotkeys. You cannot do that directly for the three little buttons in the toolbar.

Add a primitive to the scene. Switch to Edit mode. Press Ctrl Tab. A little Mesh select mode menu will pop up. And here you can add hotkeys for Vertex, Edge and Face select mode. Right click at the menu items to do so.

When you did changes at the keymap then don’t forget to save the User preferences. Or the changes are lost when you close Blender. And you have to refresh the text. It reads the values at activation. It does not recognize when the hotkeys changes. Turn the text display off and on, and the changes should be displayed.

The final version is available.

There were some more minor optimization at the code to do. The spacing between the lines is now incrreased, it was too close. And i have added a few more useful hotkeys. Like the one to add to / subtract from selection. Or the search menu. Or loop select in edit mode. All in all the tool displays the hotkeys for a bit more than 80 input nodes now.

A big thanks goes to beta-tester at the german Blendpolis forum for his help and comments.

The old beta versions are removed.

Some more code and comments cleanup. Added a readme.

What it is not: a tool to display all available hotkeys. There is simply not enough UI space available for that. And i don’t want to replace the one big searching by the other big searching. It is really just meant for the most basic and important hotkeys.

The plugin is feature complete with this version. And does what it should do. It displays already a basic hotkey set that will help new users a lot.  It is not fully finished yet though. There might come some more entries. And you never know if there isn’t the one or another bug …

Note that there will also be a version for Bforartists. The Bforartists useage philosophy is a graphical centered one. And so it doesn’t need this much hotkeys. But this version will be integrated into Bforartists then, and not be available as a separate download.