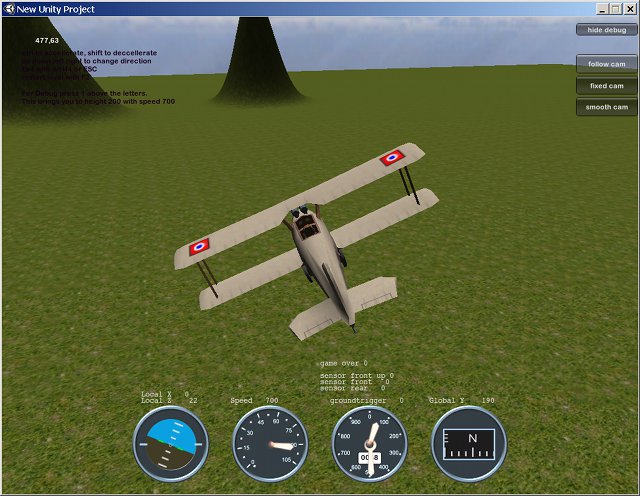 A little testproject to learn Unity. A little flight simulator

– Performed the mentioned texturefix at the GUI textures
– Debugvalues are in a separate file now
– Added two other cameras, and a way to choose between them. The one camerascript is from Unitywiki
– Added physical crash. Airplane is not breaking, but it bounces now.
– Added a way to drive across hills.
– And some minor changings here and there.

I wanted to fix this two points too. But my knowledge is too small for it. Maybe when somebody at the Unity board shows some mercy ..

– Joypad input the same than with Keyboard.
– Better Horizon instrument

There is of course lots of finetuning and bughunting missing. And there is always something that you want to add. Especially in this case where i have chosen a variable solution that collides more than once with the Unity physics. But my goal was not a game, i wanted to learn something. I have arrived where i wanted to go. The project has fulfilled its purpose.I`ve learned the basics of Unity. At least somehow 🙂

So that`s it for now. This project is done. Have fun with the result. Maybe it is of use for some of you.

Finally, many thanks to all of those who has helped me with my first steps in Unity 🙂

The zipfile contains the Unity project folder, and a exe version in case you don`t have Unity installed. You can takeoff, fly around, and land.

To layer the compass and horizon instrument was a very special chapter. And i still need to fix some texture stuff because Unity makes a padding around my textures by default. Which scales the textures, and moves them a bit out of position. But the instruments works as thougth.

Except the horizon instrument. The euler angle flip ruins it when flying a salto. I can just retreive the euler angles from an object, and not the real angles. I have no idea how to fix this issue. That`s a real drawback compared to 3DGS.

You can crash now when you collide with a mountain or land in a wrong manner. Crash is relative here though. I reset the position of the airplaine back to initial position and rotation in this case. Game over.

And i`ve fixed some small stuff plus added other stuff here and there. Like wrap around the playfield so that you cannot fly underneath the landscape anymore.

– Fix the joypad input settings so that i have the same flight behaviour than with the keyboard
– The mentioned texture fix
– put everything debug into a separate file. This stuff is curently scattered over the instrument scripts
– I need a better solution for the horizon instrument
– Camera. It is still the standard smooth follow camera
– Physical crash when possible. No breaktdown of the airplane, but a bounce for example …
– And all the little things to fix and to add when i stumble across them 🙂

25.3.2010 – Again a few steps further. And my enthusiasm about Unity has slightly decreased. I hope it comes back at some point.

The flying behaviour is more like flying now. Means except those situations where the airplane barges around in an impossible waveform. Or when it starts to shake. A overriding problem somewhere. But i cannot find it.

What really bugs me is that you cannot retreive the local angle of an object. From 0 to 360. What is to retreive is the Euler Angle. And this one jumps from 0 to 180 and back. Which gives me big problems that i cannot really compensate. This one also stops me from making my horizon instrument. Remember it jumps by 180 degrees …

Next nightmare is the GUI system. I don`t get through. And a tutorial for it doesn`t exist yet. I have at least not found one

Also curious is the different handling of keyboard and joypad. Joypad gives me a compeltely different behaviour. I would need to add a extra code snippet somewhere. So don`t even try to use the joypad. Current setup is made for keyboard.

As told, i`m a bit disappointed about Unity. I didn`t have this big problems in 3DGS. Let`s have a look if my issues gets fixed in Unity 3.

Nevertheless, here the next version of my little flight sim. You can still mainly takeoff, fly around, and land. The zipfile contains the Unity project folder, and a exe version in case you don`t have Unity installed.

18.3.2010 – I`m away from 3D Gamestudio since a pretty while. It was in the end too annoying to work with the stone age workflow of the 3D Gamestudio. Then there was the real life plus some other projects. And so i didn`t go on with it for a while. I still want to create a 3d game though. And so i was very happy to hear that Unity 3D Indie turned into freeware. I downloaded it, and started.

First steps have to be small. Cannot be small enough. So equal to starting with 3DGS, my first project with Unity is a small flying level. It`s the same graphics (instruments will follow), and the same simple control scheme. CTRL to accellerate, Shift to decellerate. Plus you can of course use the joypad too.

Here the very first somehow working version. You can takeoff, fly around, and land. The zipfile contains the Unity project folder, and a exe version in case you don`t have Unity installed.