This little tutorial is about shaping a 3D tree by hand.

I use trueSpace 6.6 for that. But the described method should also work with other 3D software. There is surely a similar tool in your render software. I don’t use anything exotic here. But i assume that you know how to model and texture.

There is lots of software around nowadays that can create plants and trees in 3D. Kurtz Ferhout Plant Studio, Arbaro or Povtree to name a few freeware ones. And of course the commercial ones. The results with this software are mostly better than handshaped ones. But there are situations where you have to shape it by hand.

For example to avoid this too realistic look. You may be in trouble when you want to render the result in a small size for a 2D game. All those fine structures. Or because you cannot achieve your needed look with a software. So here comes a little tutorial how to shape 3D trees without any software. By hand. Don’t worry about the time for that. You may be as much as fast as with your software once you get the trick 😉

Don’t forget to save from time to time. With another filename. Then there is always a step back possible to reshape some components …

What is a tree

Stupid question, isn’t it? A tree is a thingie with a trunk and some branches and leaves at it. Yeah, you are totally right 🙂

There are nevertheless some differences. Different tree species looks totally different. A Fir is no Birch. So what is a tree? What makes a fin being a fir? And what makes a Birch to a Birch?

Let’s start with the finest details. The leaves. There are very different shapes and colours. Also important how the leaves are placed at a twig. Parallel, paired up, bushy, needle like. On it goes with the branches. Also here different shapes and arrangements. A Fir has more straight branches, placed around the trunk. A Birch can have more than one trunk, the branches goes more upwards, and it has several small twigs that hangs down at the branches. The trunk can be rough, even, dark, light, etc. . And then there is the overall shape. A Fir is more cone like while a Birch is more rounded at the top …

What i want to tell here: first you have to know what kind of tree you want to shape. And what your tree looks like. Colour, structure, shape.

You need to do some research first. So off to the next forest (EEK!), alright, turn on Google, search for a tree and have a very close look at it. What’s the shape of the leaf. How are the leaves placed at the twigs. How do the twigs spread, how the branches, what is the overall shape, etc. .

This funpart is your part. I cannot help you with that. You have to find out the correct colour- structure and shapefeeling by yourself 😉

We need some leaves, twigs, branches and a trunk. And then we put it all together to a tree. Easy, isn’t it? Sure. But how exactly. You will get mad when you want to place every leaf around the tree one by one. You will never finish that one!The story is really simple. The trick is to model from small to big. First a leaf. Then a twig where we place some leaves at it. Then some branches where we arrange the twigs with its leaves on. Finally some of this branches that we place at the trunk. Done. Welll, nearly. Let’s start 🙂

I don’t mind about shaping a special tree species here. I just want it to look somehow like a tree at the end. The way is the important part here.

Let’s shape a leaf. You can use a simple divided rectangle polygon and map a leaf texture at it. Or you model at least a rough shape of a leaf. I’ll do the second one here. When done, move the axis of this object to its end. Makes the later rotations easier. 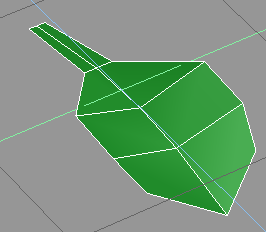 It’s a bit bended and tweaked. You should also do this when you use the texture way. Leaves are never comletely plain. And we want to avoid that our leaves turns invisible from some angles of view. Take care that you don’t use too much polygons for this leaf. We will have lots of leaves later at our tree. Here i have 15 Vertices and 9 Faces. Don’t ask me where the nineth face comes from here. I also just count eight. TS make such fun sometimes … 😀

On with a twig. Here comes the first big decision. The needed length. Straight or bended. But let’s create your twig first. A simple cylinder with some division levels so that we can bend it. 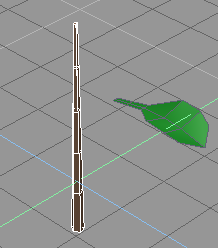 This is the point where you have to look for correct UV Space for the mapping. It’s too late for easy mapping when we have bend it. And even when we don’t bend it, we want to avoid that we have to readjust dozens of pieces later 😉

The bending. You can do this by hand. Pick the edgeloops and move it to your needs. Or you use a bones system for that. Modeling with bones. Works good in trueSpace. And ways faster and more accurate than by hand 🙂

I hope at this place that you can also extract deformed meshes in other bones systems.

Let`s rig our twig with the standard bones. Then bend it to the needed shape, and finally click at the Split Hierarchy into polyhedra and IK linked Branches button. Motion Studio is useless here. I once got it to work. But now it refuses to do so. One working way is good enough though 🙂

Place some bones, skin the twig, and bend it to your needs. Then copy it. We may need other shapes later to have some variations. Then click at Split Hierarchy into polyhedra and IK linked Branches. 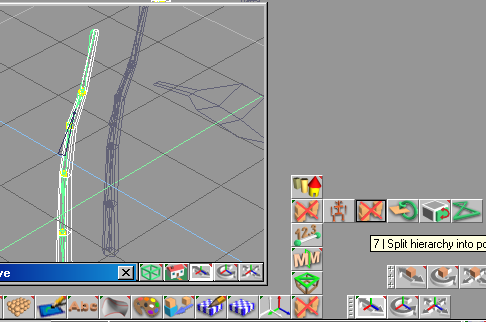 We have our twig now. Let’s place some leaves at it. I have recoloured two leaves with a minimal more light colour. Older leaves are mostly a bit darker than fresh grown ones. Fresh grown ones are normally also a bit smaller, I don`t mind here. Take care that the leaves really ends in the twig. And take care of the direction of the leaves. Such a leaf prefers to look in direction of the sun. So it is a thing of your tree how you place the leaves here. When the twigs are more upwards you have to twist the leaves to more horizontally compared to the twig. I choose the flat way here. My leaves should go out more the side way … 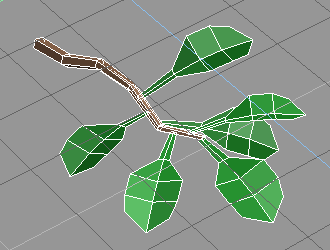 When done glue the leaves to the twig. Take care to do so. We want to have the axis at the one end of our twig.

By using more of our twigs and some variations in how we place the leaves we can bring it to look more alife. Normally i always shape minimum three variations. For this tutorial i will use just one. This is really just made of a leaf with two colours and one twig. A bit rotated and a bit random placed 🙂 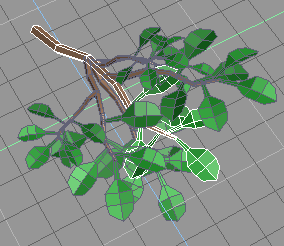 On with branches and trunk. Making a branch is the same way than making a twig. Branches are just a bit more bulky. You can simply pick your twig, scale it generally a bit bigger, and then scale the edgeloops to your needs

Now follows the same step that we had with the leaves and the twigs. This time we place our more complex twigs from above to the branch. Think of the direction of the leaves. Don’t twist it too wild. Better create some other twig variations when you are in need for … 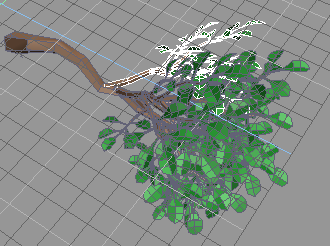 Doesn’t look too bad, does it ? Place as many of the leave twigs here as you need. Dependand of how concentrated you need your leaves to be. When done glue everything together. We have our branch 🙂

The trunk. Same procedure. Rescaled a twig, rescaled some edgeloops, added three segments at the top and extruded some faces at the bottom to get some roots. Then i gave it some SDS so that the roots doesn’t look too blocky. Don’t froget to tweak the UV space for the roots here. The rest of the trunk should still fit. We had set up the UV space for the twig before we have bent it. 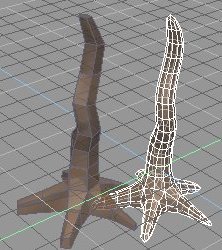 Let’s place some of our branches at the trunk now. Do some variations. Like different length of the branches. Cut away a piece of the branch when it’s too long. Or do some Point Edit to move some edgeloops. I have two different lenghts here now. A branch can also end in another branch … 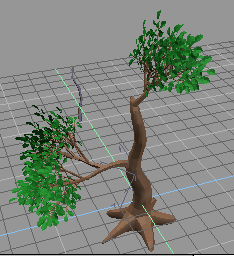 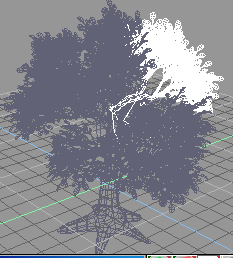 Best is to work from top to low or from low to top. Gives you the best control. Take care that the branches doesn’t end i the air. At that point you should notice why we have set the axis to the end 😉

With my tree i have chosen to have branches that goes more or less straight out of the trunk. Normally i should shape some branches where the leaves are more horizontal to build the treetop. Treetop branches goes more straigth upwards. For this tutorial i will leave it this way.

Last step: glue everything together. And because i dislike the flat brown colour here i texture the trunk, the branches and twigs with a bark texture. Should fit because the UV space is tweaked. 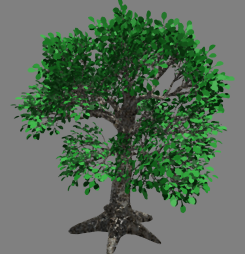 Tree is grown. Don’t forget to water it 🙂

The pure time to build this tree was around half an hour. I have spent more time at the buttons and sliders of several tree making software. With not this good results. You will be able to create totally unique and different trees with this way the more you get used to it. Play around with different twig lenght, the shape, how the leaves are placed, number of twigs and branches …

And when you use texture leaves instead my polygonal ones here you will receive a really useful result.

The poly count here is around 11.000 Vertices and 50.000 Faces. Treemaking software mostly deals with lots more. The biggest advantage though is that you have much more control over your tree. To change anything at a Pov Tree shaped tree is nearly impossible. With this hierarchical way here it is very easy to add, rearrange or remove complete branches.

You can convert it to a single mesh when you are satisfied with the result. Hierarchical objects are resource eater par excellence. When using trueSpace you can do that with Poly Combiner Plugin for example.

And what about Low Poly?

I just have described the High Poly way here. Some components and steps are nevertheless also useful for Low Poly Trees. Render a leafed twig or a complete branch. Then use it as a texture with a divided and bended mesh piece. Now you can use this piece as a leaf twig to the branch or as a branch to the trunk. 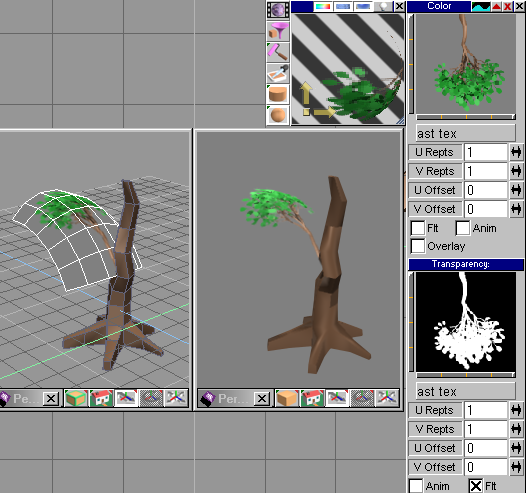 Or simply render the complete tree from besides and map it as a texture to a plane polygon. Three of it that crosses itself. Or even just one. That is the lowest Low Poly Tree 🙂