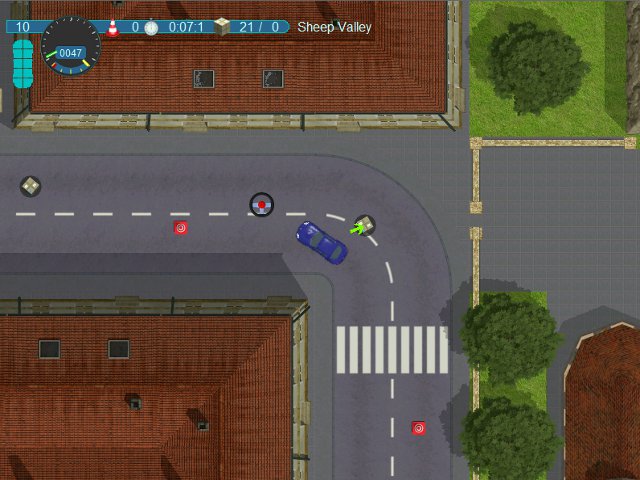 Parcel GT is a little mousecontrolled funracer. You drive with your car across seven racing tracks, and collect parcels. There are some limitations so that it doesn`t become too easy. You will get a time penalty when you drive over pylons, your car can break when you crash too often, and you can run out of fuel.

The game comes in more than one flavour. It was primarily developed as a flash game. So here the flash version first. Regarding loading times, the flash game is 6.2 Mb:

Note that the online highscore is unfortunately broken since my last server move.

11.1.2011 – I have submitted the game sucessfully to Mochi after another beta cycle and a few more fixes. Mochi is a game portal page for flashgames. That way i can have a wide submission and an online highscore. And so this version is also the full version

Lots has changed. The name of the game for example. The initial name was too dangerous, copyrightwise. Parcel GT does fit much better anyway. This is the second Beta version. Parcel GT is nearly finished. It`s about time. This one was amazingly lots of work for a mini game. Over three and a half months so far.

There are still a few things to do. I will most probably connect the highscore to Mochi so that you can compare against each other. The highscore is at the moment still local. And there are surely some bugs left 🙂

Here comes the first prototype of Transporter. It`s no full game yet. Just my little playground to solve the fundamental questions and problems of the game. Like collisions. The game will be a flash game, and so is the prototype.

What follows now is to create a game out of it. HUD, menu, more levels, highscore …

I work at a little Flash game since a while. Some kind of topdown racing game, which gets controlled by the mouse. I already started first experiments before Unity 3 arrived. There is not really lots to show besides the shot above at the moment. And there is no download neither.But it was time to create this project page for the game. Its current title is Transporter. But i am not sure if it will be the title of the final game. There may be a conflict with a movie that has the same name. And i am sure that there is more than one game with this name already. The almighty name problem …

First i thougth that i can finish this little game very quick. Something to shorten the time until Unity 3 arrives. Well, Unity 3 is long out. But my “little” project turns out as something to be a bit more complicated. MMF shows its weak sides here. The instances problem strikes back too often. Makes me lotta headacke. So nothing with quick, hehe. But i think that i have mastered the biggest hurdles now. And hope to have a first playable version to upload until christmas.

If it will really end as a flashgame is another chapter though. MMF can export to Flash. But Flash has some quirks compared to MMF. And the current Flash plugin is everything but bugfree too. So what works in MMF does not mean it works in Flash too. We will see 🙂