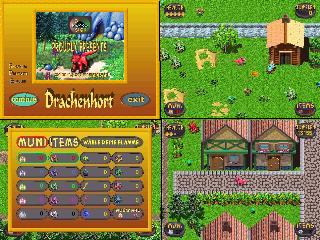 Minimum requirements: 500mhz, 128mb ram, graphic card with 32 mb ram (it makes no fun with slower pc´s because of the loadingtimes between the frames, but should be playable)

My biggest game until this point, a 2d-actionadventure.

Playersprite is a dragon called Gwynnalfaidur. Some wizards has stolen his treasures.

(by the way, “drachenhort” is the german word for the treasures of a dragon … )

ATTENTION! There are unfortunately some Bugs and Crashes inside the game. Some of them are based on my lack of knowledge at that time ( advanced beginner ) , and some of them are based at Bugs in the Authoring Tool that i used to build the game at this time. The current Version of this Authoring Tool is as stable as never. But it doesn´t load the old gamefile anymore. So there is no way to fix the remaining Bugs. And i simply don´t have the time to rebuild the whole game. It is just still up because of history reasons. I once have spent 9 months at this game. Not this easy to simply delete it then … 😉

So a big Sorry at this point for the Bugs and Crashes that will appear during the game.

There are also some random crashes while Framejump. They appear randomly. Sometimes it works, sometimes it crashes.

I was also reported about crashes while collecting Jewels. So save as often as possible. Exception is the ” Blue Gate” Situation as described above 😉

There is also partially the english translation missing …