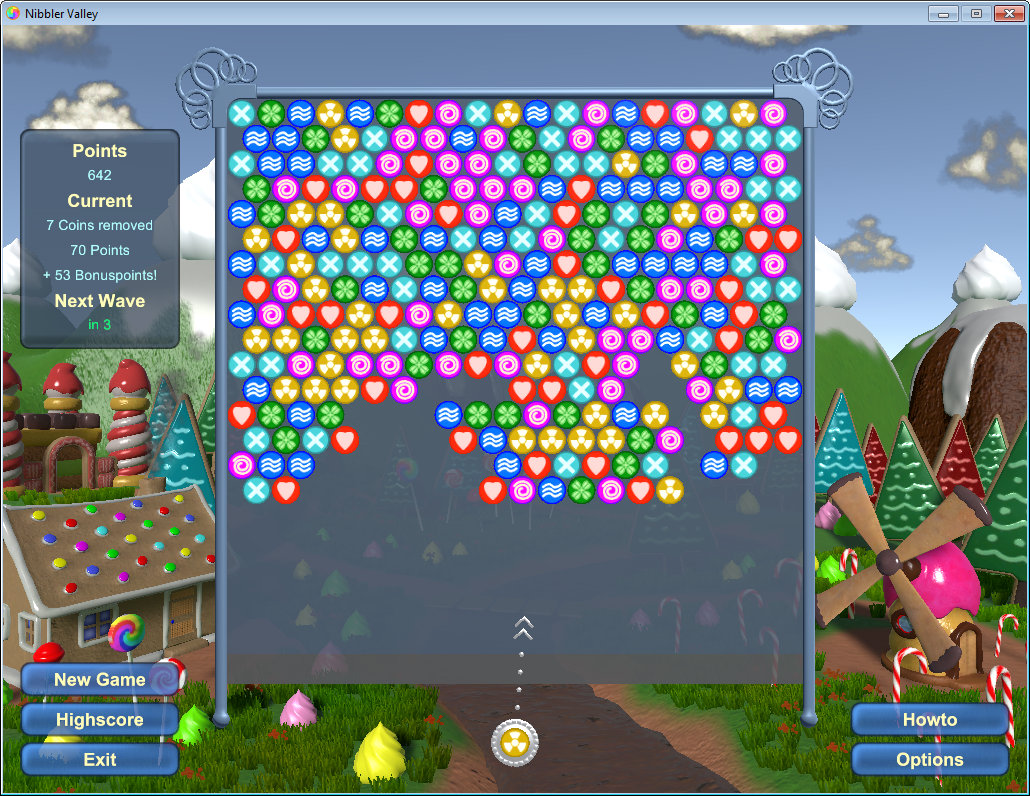 Nibbler Valley is Gold. I haven’t found any new bugs, and there were no new reports neither. Chapter closed.

As promised, there is no Webplayer available anymore. The Unity webplayer will not run in modern browsers behind September anyways. And so it makes no sense to keep the webplayer version online.

The developer builds are also deleted. For the newest version see the Nibbler Valley main page.

Found a few more bugs to fix. See Release Note. And i have tweaked the method for the bullet movement a bit again. Now it does a spherecast once per shot or border contact. And not every frame anymore. I have also added a new feature. I forgot to give a bonus for clearing the whole table. So this version is again just a beta. And not the full baby. You never know with new features …

But i am optimistic that this finally was it. The next version is very likely the gold version.

The new method had a flaw. The bullet tunneled through the border for somebody. Unfortunately i am not able to reproduce it so far. But i have an idea what the cause could have been. So this bug is fixed on suspicion.

I also found and fixed another bug. The bullet could be stopped by the terrain, which was intersecting with the playfield. The terrain is at another layer, and gets displayed by another camera. But the spherecasts didn’t mind ^^

The project is migrated to Unity 5.1 now.

Everything is looking well. Fingers crossed that i am really close to the final version this time 🙂

The new bullet move method is implemented. Now i don’t use physics anymore for the movement, but transform.translate. Which gives in combination with a spherecast finally the accurate results that i need. What remains is to test if this method is reliable enough. Not the first time i thought that i had solved the bullet move problem. And you never know ^^

Big thanks for help with this code goes to Flatterbacke. Also a big thanks to HiddenMonk, even when i haven’t used his method then. And thanks to Mark, Malzbie, RipperRoo, khaos and Flatterbacke for help, suggestions and bug reports.

My shooting method is still killing me with inacurracy, and by that caused wrong positioned coins. I really need to change it. I’m already on my way to use a spherecast method instead of the Unity movement physics. Means another Beta is already planned.

Until that, i have for now refined the border fix method. Shouldn’t happen anymore that the bullets gets wrong positioned when shooting at the gap between a border coin and the border. So the game should at least finally be playable now.

And i have packed the Linux version as tar.gz. I always forget that rar is no good for Linux …

The last remaining bug was faster fixed than thought. I had the fear that i would have had to change the whole shooting method. But it wasn’t the method that failed. I had a physics material with bounce applied. And the bounce was most probably what made the trouble. I have changed the material now. The position of the bullet is now much more accurate relative to the hit coin, and i haven’t seen any wonky behaviour since then anymore.

I can’t find any bugs anymore. So when nobody else finds anything new, then this is most probably the last beta version.

New is a windows installer version. Made with Inno Setup. Note that the Webplayer version will disappear with the final version, along with all the development versions. I had once planned to create a WebGL version, but Unity produces a result that simply doesn’t start in Firefox. Chrome isn’t supported yet anyways. So i gave up here. Let’s wait for a better WebGL integration.

I am not finished with fixing all bugs, but the last bug may need much more work than thought. I still get overlapping coins from time to time. Smells like a complete rewrite of the shooting method. Unity physics is not reliable enough here. So i better upload what i have now. And can take all the time i need for the last remaining issue.

The behaviour of the bomb has changed. It’s not longer enough to be in the explosion radius. The coin needs to touch the bomb, or needs to be connected with one of the bomb touching coins for the coin to be removed. For other changes see release note.

Version 0.9.1 is out. 11 Bugs are fixed. We have a new option. You can turn off the animated background now to save performance. The manual is finished. Code and project file is cleaned up. And the whole Unity project folder is available too. The game is open source under the MIT license now.

What makes me still a bit grief is that under some circumstances the coins doesn’t land where they should. I tried quite a few things to eliminate the problem. But ran out of options then. Still under observation.

It was time for a new game. This time something small. As you can easily see, Nibbler Valley is a bubbles clone. Shoot bubbles, err pardon, coins. And when you hit connected ones with similar colour, then those coins gets removed.

Always surprising how much work even such a small game is. I work at this game since two months now.  The core engine itself was done in a few days. But then i started to work at the background graphics, made the sound fx, wrote the song, tweaked here, tweaked there …

The background is a special chapter. It has a day night cycle. And uses Realtime GI.

Most work is done. What remains is the game balance. And of course to catch the bugs. I hope there are not this much left.

I also plan to make the game open source. Means i have to clean up the project, and add a few more comments to the code. Work for the next days. The game is made in Unity JS. I once planned to make a C# version too. But then i decided that would be too much work. One language is more than enough.

Note that the Webplayer version will most probably disappear with the final version. The modern browsers more and more removes the ability to work with plugins. In Chrome you already need to explicitely activate the Unity Plugin. And in autumn the feature will be completely disabled in the newest browser generations. So a webplayer version doesn’t make sense anymore.

I had a look at WebGL to have a working online substitute, but it did not work very well. The performance was very very bad at even the lowest quality settings. And higher quality settings didn’t even build. Maybe when WebGL 2 arrives at Unity. But that’s far in the future.