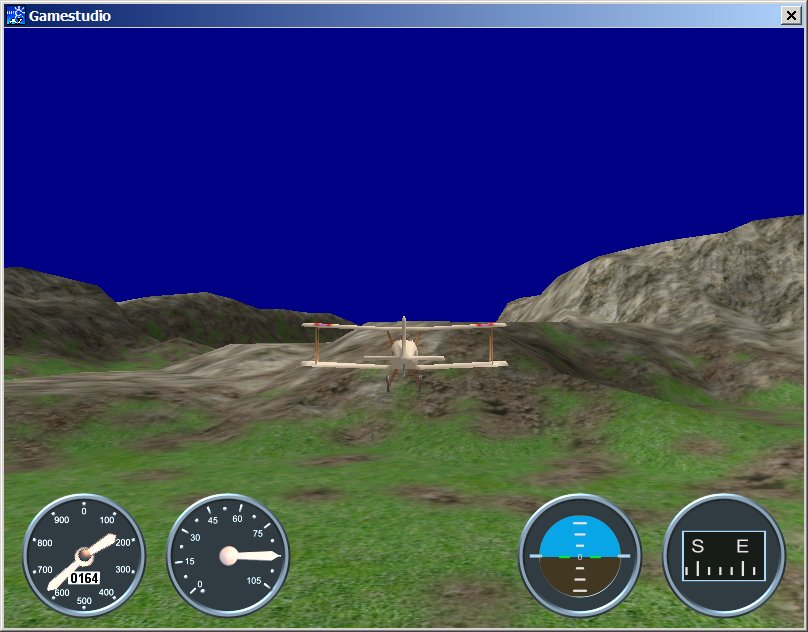 A Testproject to learn the 3D Gamestudio

16.9.2008 – I haven’t taken into account that weaker versions of 3D Gamestudio cannot handle shaders. But i use shaders for this example. So here comes a version that doesn’t use any shader. I hope it works now 🙂

11.9.2008 – Because of a request i have this abandoned project cleaned up, commented a bit and then uploaded here. Have fun with it 🙂

To start the flight level open the mainbuild29E.c file in the Script editor and press the Test Run button.

This version uses shaders. You need the Commercial version of the 3D Gamestudio. Please use the version below in case you have a weaker version than the Commercial.

Upper version uses shader. And works with the Commercial version and above. So here comes a shanderfree version. This one should work with the Extra version and and the Lite C. Is a bit bigger in size …

13.11.2007 – I have owned the 3D Gamestdio A7 Commercial. And it will stay my tool of choice for now. Even when it takes eons to build a game with it. This at least i have found out now 🙂

The current alternatives are unfortunately not ready to use yet. 3D Rad 6 surely needs lots more time before you can make a game with it. It is under heavy constructions, which leads to nothing really useful at the moment. Beyond Virtual / Game Core, which was my other possible choice, also lacks in functionality at the moment. I better don’t start in 3D with a Pre Alpha Release. What’s left was the basic dialects. But that was not my stuff. And so i use 3D Gamestudio now.

This test level is meant to learn the Lite C language and the A7 engine. As you can see i can fly around. Even starting and landing is possible. I cannot say if this will become a game. I miss too much basics to be able to judge if my current code is good or bad. At least it does what it should do. And so it cannot be this bad 😛