The Mode Tab Buttons addon installs a buttonbar to switch between the different object modes in Blender. A little substitute for the mode dropdown box.

You can find it here: www.reinerstilesets.de/anderes/blender-addons/mode-tab-buttons/

EDIT, quick update to 1.0.1. There was a button missing when you had for example lights selected.

Version 0.5.0 is a milestone release. It marks the end of this development cycle. There are no more open issues in the tracker at the moment.

This release brings tabs, or better said buttons, to switch between the animation editors. To switch between Outliner and Properties Editor. And adds buttons to switch between the most important standard layouts. New is the Wire Tools Addon from Lapineige. New is the Smart Delete addon. The Animation layout is revamped. And a few other minor changes. We have also a new splash screen. It comes from a user of the german CG Community page 3D Ring called TiLation. Many thanks for this fine splash screen image.

More info can be found in the Release Note: www.bforartists.de/wiki/bforartistsreleasenotev050

Next is a workflow development cycle. To go through the UI again, with a real project at the hand. And to fill the tracker with all the disturbing things that stumbles in my way while creating the project. 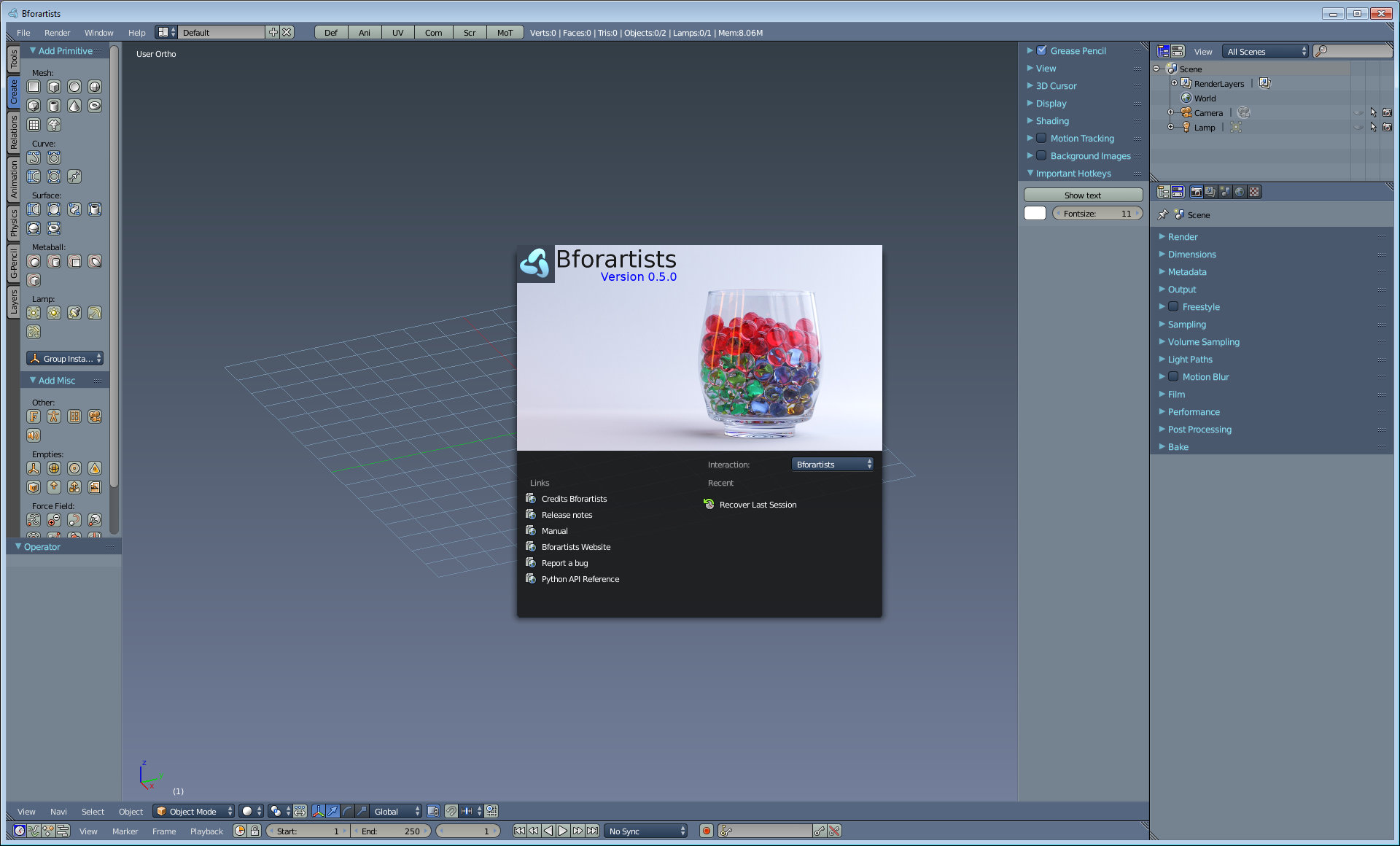 Bforartists 0.4.2  is another small release mainly around tooltips and small quirks.

A new version of Bforartists is ready. This release is mainly around tooltip issues.

I have added the tool name to the tooltips where possible. This one did really hurt my fingers, i had around 1500 entries to change, but it was important for the icon buttons. I have where possible separated tooltips for tools that has different functionality but the same tooltip. And where not possible, changed the tooltips to explain the both (or even more) involved tools.

I have removed the Spacebar addon. The menu part of it did not longer fit. T the Bforartists menu diverges too much already from the Blender menu. New is also a stroke select addon, which can replace the Circle select tool in most cases. I have again removed a few double menu entries. And a few smalll issues and bugs gots fixed. All in all there are around 110 commits since Bforartists 0.4.0.

Further roadmap: first follows to update the manual. It has to be on the same level with the software. And then i will have a look for more workflow improvements. The parenting menu will for example surely find its ways into the tool shelf. And there are still some issues in the tracker left where i haven’t found a solution yet. Some of them are bigger ones where i am not sure if i can even manage them. But i will continue to investigate.

More info can be found in the Release Note: www.bforartists.de/wiki/bforartistsreleasenotev041 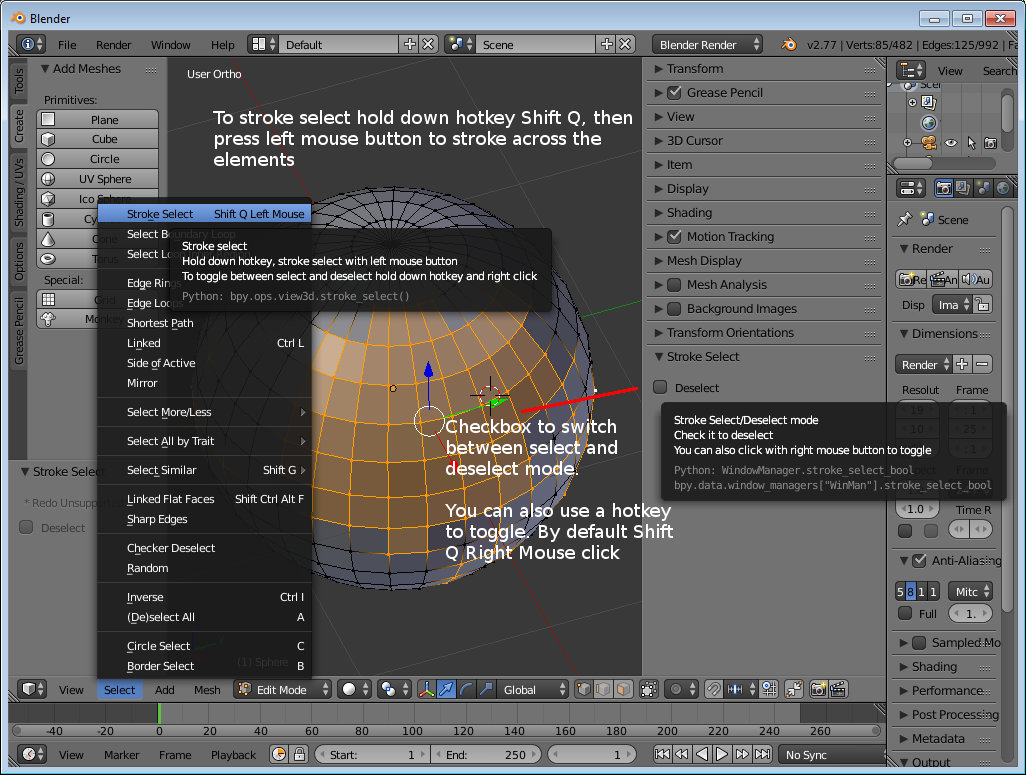 Stroke Select is a Blender addon to replace the Circle Select. You simply select elements by mouse stroke. And you can , different from the Circle select, still normally navigate meanwhile. The Circle select mode has the problem that it disables navigation. Which is a real workflow killer.

The script and further instructions can be found here: www.reinerstilesets.de/anderes/blender-addons/2016-stroke-select-addon/

This is a really sad news. But  i simply have to point at this dark chapter of the Bforartists history. Trolling. Open source projects knows this problem too well. And in the very most cases you simply ignore the trolls. It’s wasted time to discuss with the poisoned folks.

But there is a point where you cannot ignore it anymore. When it becomes character assassination. And that’s exactly what happened with the fork and me at the official Blender community page Blender Artists.

END_OF_DOCUMENT_TOKEN_TO_BE_REPLACED

There’s news at my Blender Fork Bforartists. Version 0.4.0 is the final stroke below two very big issues that did not work for me. The try to implement the UI solution Qt. And the try to implement new Editor types. This two biggies have eaten lots of time, without a visible result. And that’s why the version 0.4.0 is rather small. The 0.4 series will be reserved for some smaller adjustments instead.

Highlights of this new version: GPU rendering is now possible. I had totally overlooked that Cuda did not work in Bforartists. The new icons became a refinement. They look now (hopefully) much better. The Add menu is now finally completely in the Tool Shelf. And we have a new menu called navi. It contains the navigation tools. The Navigation menu was formerly burried in the Views menu. To have it top level makes it possible to remove the Transform panel from the Tool Shelf.

More info can be found in the Release Note: www.bforartists.de/wiki/bforartistsreleasenotev040

I need to convert the Blender manual for the Blender fork Bforartists. This has lead to this side product. The whole Blender 2.76 manual in PDF format.

Can be found in Other / Blender related / Blender 2.76 Manual as PDF

Additionally it comes with the whole manual in ODT format too. Which makes the manual now editable for everybody. ODT is the format for the popular free office suites LibreOffice and OpenOffice.

Bforartists Version 0.3.1 is out. Grab it from the download section

Version 0.3.1 is a little quickshot to connect some loose ends that i had overlooked for version 0.3.0.

Some more double menu entries removed. And the splash screen image is updated because of a ongoing troll problem with the old splash image.

A full list of the changes can be found in the release note: www.bforartists.de/wiki/bforartistsreleasenotev031

Bforartists Version 0.3.0 is out. Grab it from the download section

Version 0.3.0 brings 130 new icons. And icon only buttons in the tool shelf. Which reduces the need for scrolling in this area dramatically. You can still use the text buttons though. The checkbox to switch to text buttons is in the properties sidebar in the 3D View in the Display section.