Bforartists 3 Version 3.0.0 comes with all the changes from Blender 3. And lots of improvements for Bforartists. The constraints have now left aligned text too. The Ui and tooltips got further streamlined. The tabs in the tool shelf are now in other editors available too. The toolbar has some new entries. We have around 200 new icons for the geometry nodes editor. And all these nodes in the sidebar available. The asset browser has its first own workspace. We added some more matcaps. And a ton of small improvements and fixes. The small changes always makes the masses of the changes. A little improvement here, a little improvement there …

All in all it’s around 340 changes in this release. Not every change is a change at the source code. We needed to fix github actions for example. This was also a very time consuming task. Github actions is the test compile to check if there are some problems in the source code.

We have also a new experimental keymap with some vital changes regarding the brushes handling. The brushes hotkeys moved from F, in combination with holding ctrl, shift and alt, to X C V keys. And F is now Frame selected. No need anymore to release the mouse and press numpad 0 to put the selection in focus. Please test this new keymap for conflicts. These changes will most probably go into the main keymap with the next point release.

Here you can find a pdf file with the vital changes between the default and experimental keymap: www.bforartists.de/data/tuts/experimental_changes.pdf

As with every release, and even more with this yet another milestone release, i want again to thank everybody involved for your support and help and passion for this project. It was me a pleasure 🙂 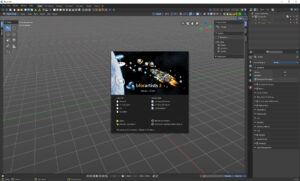